Vrbice ranks among leading wine villages in Moravia for ages. The local natural conditions are ideal for wine growing.

Two locations of Vrbice cellars were built in the time range of a few centuries and so they significantly differ in appearance and character. The older colony Na sklepech, consisting of two lower storeys of wine buildings in the village, was built in the second half of the 17th century and nowadays it is a part of the village development. Most of these are stone one-floor buildings with recessed press rooms and long vault cellars. Flat ceilings of press rooms are usually built of beams, with a sloping connecting corridor leading to the cellar built in clay. The legend says that the cellars used to be interconnected with the castle in Čejkovic and they served as a hide for local citizens at the times of robbery attacks. 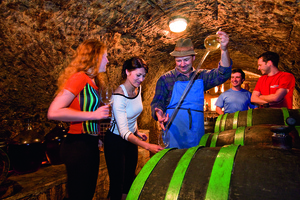 The wine cellars Stráž are a more popular location. The first corridors were built at the turn of the 18th and 19th centuries, while the press rooms with stone fronts were added to underground corridors in the mid of the previous century. The entry part of the cellar called presuz is built of mined stone , with stone gable wall, frequently built from two types of stone or of brick and stone. Relish for Gothic ogee / broken arch is a local speciality.