Moravská Nová Ves is one of the largest wine villages of the wine sub-region Slovácká. Even the sealer of the village contains a wine symbol – the grape vine on a stick, with wine knifes on both sides. There are more than 170 wine cellars in the village.

The old days as well as the live wine presence of the village are proved by cellars and cellar lanes. The wine track through the Podluží region in the direction from Hrušky will take you through the vineyards up to the village border, to a rest point with an information panel. You will turn right and going past the railway you will get to the wine centre of the village. The cellar colonies Výmol, Zátiší and U trati create the golden cross of local wine society. The oldest lane U trati was divided into two parts by the railway built in the 40´s of the 19th century. You can find there even the parish cellar, where tithes were collected.

Two colonies in the neighbourhood have an interesting origin. The ground floor and one-floor press houses of red brick in Výmol and Zátiší were built thanks to the economic crisis in the 30´s of the previous century. The owner of two brick factories in Nová Ves had problems with selling the bricks and so he used them for building the cellars and press houses on purchased allotments. Then, he sold them to local wine makers. The cellars in Lipová Street are dispersed between houses and they belong to the oldest cellars in the village. The colony of cellars U myslivny is interesting for tourists. 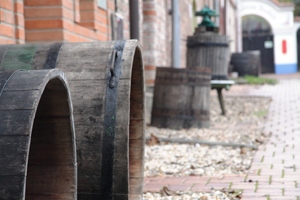