The village of Mikulčice lies in the centre of the Slovácko region Podluží and it is surrounded by the beautiful environment of vineyards, orchards and flooded forests. The village takes pride in rich history, reaching the 2 nd – 3 rd centuries of our era.

Mikulčice – that is not only history. It is also the centre of folklore in Slovácko. Several well-marked cycling tracks cross the village – for example the Podluží track.

There are four cellar lanes in Mikulčice, each of them of a different character:

The colony consists mainly of ground-floor brick press houses with cellars. The close pond is a reminder of clay mining used for bricks production. Short and flat cellars were built at the beginning of the 19th century and they were used mainly for storage of food for cattle, placement of wooden "canons" for removal of stale.

The cellar colony U myslivecké chaty is built in a horseshoe shape with a hunting challet in the centre. It is an extensive overview of cellar architecture as well as demonstration of art feelings and taste of owners. The oldest cellars in the village can be seen in a small square next to the Mikulčice cemetery. 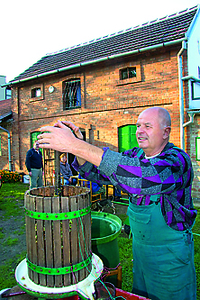 The first cellars in the colony "Na dědině" were built at the beginning of the 19th century. Ten vaulted cellars with brick fronts were originally used for storage of food for cattle – you can see them in front of houses in the direction of the Large Moravian settlement Valy.

The shelters can be found at the edge of vineyards in Pusty, Zvolence and Přední díly lanes. Their name indicates that they originally belonged to the inhabitants of Těšice and up to now, the people are aware of the border of two originally independent villages. Nowadays, the wine colony consists of 47 ground floor press houses with cellars scattered along the road. The Těšice cellar colony offers an example of unique wine buildings – nowadays nearly disappeared ground cellars with an entry protected by a simple shelter of roof spars. The cellars were built by small vine growers who ordered grape pressing from their neighbours.

The original wooden screw presses are used as decorations only, but a function press from 1812 can be seen in cellar No. 32 at Mr. Handlíř.

COLLEGIUM VINITORUM – an association of wine makers from the villages Moravská Nová Ves and Mikulčice.