Formerly a town, the old village of Novosedly can be found in Břeclav district, in the flat valley alluvium, on the right bank of the Dyje River, to the south of Drnholec, in Mikulov wine sub-area.

At the present time, Novosedly is one of four largest wine villages in the Czech Republic.

The German settlers built press houses with vaults in Novosedly as from the 18th century as multi-purpose farm buildings. The press houses were originally built of unburt brick and they were used for wine making as well as storage of hay and other stock in the storage under the roof. The underground vaults were dug in sandstone – the excavated sea sand was used for stucco decorations of ground floor press houses. The most extensive vault colony of the village is the location of several dozens of cellars called Na jámě. The non-organised colony in the suburbs of the village, below the road to Mikulov, offers examples of ground floor press rooms with store houses, floor press houses as well as dug vaults with brick fronts. The oldest buildings date back before the year 1800. At the present time, new vaults with press houses are being built in former vaults locations. There are very interesting deep old vaults, with their corridors leading below a heavy-traffic road. The vault lane U trati – mostly preserving its original character – offers ground floor press houses with storehouses with variable fronts. 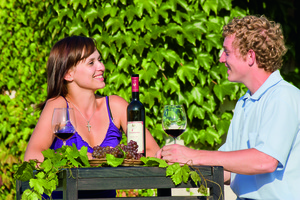 The most important monument of the village is the parish church of St. Oldřich with Chapel of St.Roch, one of a few original Roman church monuments  in Břeclav region. Other listed monuments include an interesting Tuscan column with Madonna in the village green from the end of the 17th century.