Mikulov and its surroundings belong to traditional wine centres. The geographical location, climate and variability of soils in Mikulov wine sub-area with limestone slopes of Pálavy affect the unique character of local wines.

The Romans brought wine growing to the Mikulov region, as their legions lied in the vicinity of Nové Mlýny dam. After their departure, vine growing and wine making developed mainly in the era of Large Moravia when vine got its fixed position in agricultural production of Southern Moravia and mainly the Mikulov region. Viniculture continued its development in medieval era and so Mikulov quickly became an important winery centre thanks to excellent vineyard locations in immediate vicinity of the town. The local protected vineyards at the southern slopes of Pálava belong to hottest locations in Southern Moravia up to these days. The local castle houses the Regional museum with wine museum and exposition called Wine across the centuries.

The Mikulov vaults were built in several locations at the town suburbs. But you can find important vaults and wine colonies a few steps from the historical centre of the town as well. 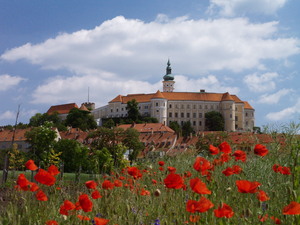 The houses above vaults are the imposing buildings of the town of Mikulov. A unique underground works can be found in a baroque house of 1525 - Na Jámě No. 17. The contemporary copy of an original wine house from the 19th century Na Jámě No. 7 contains complex stone vault premises. A valuable wine object can be found on the ground floor of listed building in Koněvova street No.22. The old square press house includes four fields of cross vault and it is connected with the Haban vault.

The picturesque and twisty corridors in a limestone rock serve for wine storage – you can find them below Kozí hrádek and they were recorded as soon as in the mid of the 18th century. New vaults were built even in forthcoming years – this is confirmed by bricks with Jewish motifs and German monograms, found during vaults reconstructions. The beautiful and mysterious premises of local vaults are unfortunately frequently covered by poor-style press houses from the second half of the previous century.

The construction of wine houses and vaults in today´s street Kamenný řádek probably started as late as in the end of the 18th century. The time of origin of wine buildings on the slopes below Turold can be assessed on the basis of construction of the fronts. The oldest ground floor or one-storey press houses above vaults were built at the turn of 18th and 19th centuries. The colony also includes a line of new vaults. In other vault colonies in the town – Bezručova and Zlámalova streets – there alternate deep ground vaults with decaying fronts of traditional form with new wine buildings. 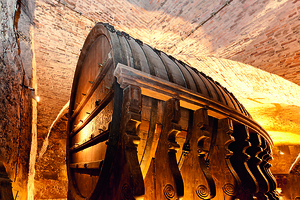 Mikulov is found in the very centre of viticulture and so there are also some wine trails with stops in local and family cellars and vaults and with possibility of tasting in taverns and wine shops. Wine ion Mikulov region is celebrated and so everybody knows the traditional Pálava vintage held in any corner of the town always on the second September weekend.

The Way of the Cross on Holy Hill

The Church of St. Nicholas